After our move we went to municipal bureau the next Monday to register our move and since the one year since the translation of my drivers license is almost up we decided to change it as well.

Unfortunately it took way longer than expected (somehow there were a lot more people in Yokohama than in Soka…) so we had to settle for the next day.

The place where you can change the license only takes on ten people in the morning and ten people in th afternoon, so we decided to get there as early as possible. After a very short night we got up around six thirty to get there before eight. We found our way without problem and were actually half an hour early, which resulted in me being the first on the sign up sheet.

Around the eight the police officer in charge called us up and checked the necessary forms and information we brought with us. Though everything was in order we did forget one essential thing: proof of me driving at least three months in Germany after I got my license or that I have been living in Germany for at least one year after getting the license.

I’ll be honest, my face didn’t show a lot of politeness and understanding after he told us, that we not only have to go back home to get the proof, but that also only originals of a diploma or such would do. Since I had had very little sleep and knew, that I believe had brought only copies to Japan, I wasn’t having the best time. Especially because he was only talking with my husband and just answered every thing I said with dekimasen (not possible).

So we went back home after getting something to eat first. Since we skipped the breakfast that could have been a reason for my foul mood as well…

At home I searched everywhere for something that might count as proof and finally found three pay slips I scanned w few months earlier for the authorities in Germany. We called to see if that would do and after we got an okay went back to the train station.

We got there in time to be number 8 on the sign up sheet and what followed were five hours of waiting after the police officer accepted my application form. Only interrupted by taking a photo and an eye exam at the end. We were nevertheless under the first people to walk out of there again, since I (as a German) didn’t need to take a written exam and a driving test as well.

The only confusion arose when the lady, that gave me my driver’s license and a lot of papers to go with (for rules and such), told me, that I need to use the “New Driver” Stickers for a year (because I couldn’t prove that I have been driving ). Only I heard it as question and told the lady that I wouldn’t, that I don’t need to. She told me again, I declined again. Until my husband told me, that it wasn’t meant as a question. Though the look on her face might have told me the same thing if I hadn’t been distracted by already reading the papers she gave me ^^”

All in all it was just a lot of waiting time until I received my new (and really not very cool looking) Japanese driver’s license. 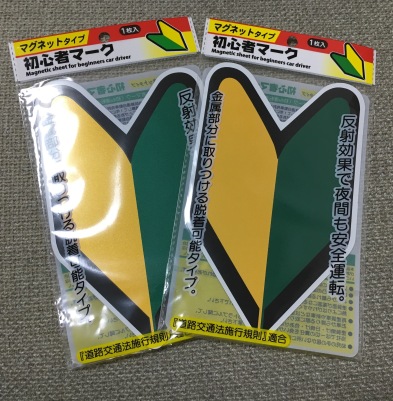 3 thoughts on “Getting my Japanese driver’s license ”