Today is the 21st Birthday of Kyary Pamyu Pamyu and coincidentally I received my ticket to her concert in the mail today. What more reason do I need to make her my next topic?

For her 21 years she has already reached an unbelievable popularity not only in Japan but all around the world. She started out as a blogger and Harajuku Fashion Model, appearing in several fashion magazines and street snaps. In 2011 she published her first single “PonPonPon” that gained huge popularity not only for her catchy sond but also for her music video (which you should go see, because every description would just be too bland).

She exudes Harajuku Style and happiness, which probably is one of the reasons she was crowned “Kawaii Ambassador of Harajuku” by the Tokyo Major and included into the “Cool Japan” Strategy of the METI. The “Cool Japan” Strategy, which is exactly what it sounds like, is meant to make Japan more appealing to people around the world and Kyary Pamyu Pamyu visited the USA (amongst other countries) to promote Japans “Kawaii”.

She is regularly seen in TV-Shows and commercials and she even published a book named “Oh! My! God! Harajuku Girl” about her life. Though this might seem a bit premature at just 21 years at age, it supposedly will tell her fans everything they ever wanted to know about her. I haven’t seen it yet, but I might pick it up the next time I am in Japan.

Her exuberant style is just fun to see and so far I really liked her songs, always having a catchy tune, so I was very happy to see, that for her “Nanda Collection World Tour 2014” (her second world tour already) she will be coming to Germany as well! I ordered my ticket right away and got it in the mail today (^__^) 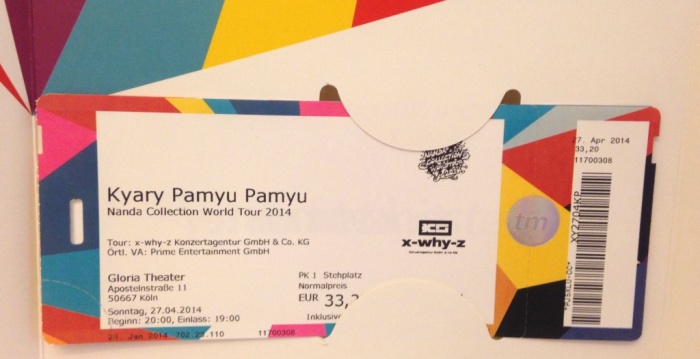 (Obviously I was too excited to take a decent picture)

There are many ways on which you can keep tabs on Kyary Pamyu Pamyu and what she’s up to. Here are some of them: