Just a fair warning: This post may contain fangirly language 😉

After I received my ticket in January I was so excited to see her in person and was lucky my husband wasn’t home because I would have driven him crazy with listening to the two albums of her nonstop (Pamyu Pamyu Revolution (2012) and Nanda Collection (2013)). Unfortunately none of my friends love Japan (and everything about it) like me so I was doomed to go to the concert alone, but I hoped to find some likeminded people while waiting in line.

Though the Gloria Theater in Cologne, where the concert was held, is not so big (maximum standing capacity about 900 people), I wanted to get there early to secure a spot in one of the front rows to be near to the stage. Some people from one KPP (obviously short for Kyaru Pamyu Pamyu) group on facebook were waiting as early as 11 am event though the doors would be opened around 7 pm.

Though I arrived also quite early in Cologne I first went to have some Sushi at the Bento Box because I was sure I wouldn’t last till the evening without lunch.

The Sushi is not bad, though I have to say that Maruyasu is definitely better (for the same price).

When I joined the queue in front of the Gloria Theater there were about 20 people in front of me, so not very much. I heard that when Perfume was giving a concert at the Gloria last year the queque was down the block as early as 11 am so not only I but quite some people were surprised that most of the people arrived quite “late”. 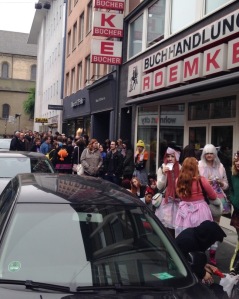 Most people came in groups, and though I recognized the one or the other from the KPP group on Facebook I was just too chicken to walk up to them in the front. Well, there was one guy right next to me, who first seemed to be alone, but somehow his kigurumi was just a teensy bit unsettling. Well that and he was nose-deep in a book 🙂 Everyone around me was busy reading,  playing Nintendo DS or was already talking in a group so naturally I felt a bit lonely…

…until I noticed two girls talking in the linde behind me and after a few minutes decided to throw myself out there and joined their conversation. Turned out to be the best decision because they were absolutely sweet and their two friends (they all study together) were as well and we spent the hours till the doors opened talking away (*^_^*) Some jealousy drama ensued when one of the girls got a message from another friend with a picture this friend had taken with Kyary a few moments before while walking around Cologne *o* Everyone was like “Nooooo, why not me? I wanna meet her toooo”

After standing in line for 5 hours my feet really hurt and I was glad when the doors finally opened… just to realise afterwards that we would have to wait another hours, only in a more confined and stuffy place… *dun dun duuun*

The stage desing was quite cute, like in one of Kyarys PVs

And of course all pain was forgotten once the lights went out and Kyary came onto the stage with her dancers. 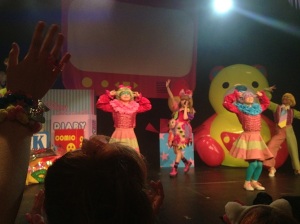 After the first songs she read a greeting in english and german (very cute “Habt Spass zusammen”~ “Have fun together”) but talked the rest of the concert in japanese without translation, which somehow no one seemed to mind f(^_^)

The stage was about 3 metres away and although we had some quite tall people in front of us we could see very well, which contributed to at least some okayish pictures with my phone. I really need to get a new camera… Though I think with the lights at the concert as well as the constant movement I wouldn’t have gotten very far with any other normal camera as well. Also I only took some snaps in between and after each costume change because I didn’t want to miss the concert while watching my phone display 😉

It must have been so hot in those suits…

When Kyary came out with the second costume I was quite surprised as it was a (somewhat modified) Dirndl, a (stereotype) traditional german costume. I wonder if she had special costumes for every country (^_^)

(EDIT: After seeing some pictures from the Paris and London concert it seems that she wore the costume there as well so maybe I got ahead of myself and wanted to see a germany specific costume f(^_^;) Well, it does look quite similar, but no matter what it looks cute) 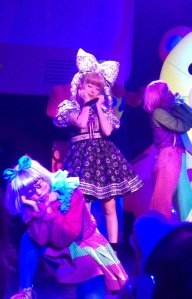 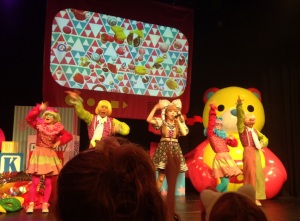 The dancers were great. Not only do they look quite colorful, their expressions match the outfits, the show must have been exhausting but they made it look like they just had a lot of fun.

When she said it would be the last song I was so hoping for one of my favorite songs, “Fashion Monster”, and it really came (^___^) *yay*

Of course everyone was shouting for her to come back and give an encore (or in japanese “ankooru” 😉 ) and she really did come back, which to be honest Idid not expect, but it was planned I guess because she sang two more songs. One, “Candy Candy” is very famous and I just thought “How did I forget about that?” and the very last one was a “Sayonara Song”. 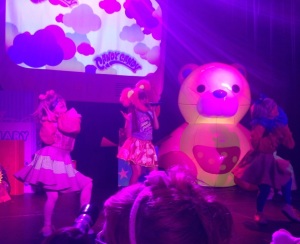 I’ll also definitely have a lookout for official pictures. Kyary took pictures with the whole audiece at every concert and I think we’ll probably be visible on the one from cologne. (EDIT: So far, pictures from Paris and London and other locations have surfaced but unfortunately not for cologne, all in all the coverage for germany is very scarce)

Cologne was the 10th stop after America, Australia and Hongkong and Paris as first town in Europe. There are already a lot of pictures and posts to be found, for example posts for the concerts in Seattle,  Chicago or Manhatten, which are very good and have some nice pictures as well. Today is the concert in London, after which the Tour will continue to Asia with the last concert being held on June 28th in Bangkok.

And last but not least the Setlist for Europe/Australia/Asia for the Nanda Collection World Tour: