After our Lunch in Kita-Senju we made our way to Harajuku.

Harajuku is one of my favorite parts of Tokyo, though I have to confess I haven’t been around an awful lot (which I plan to change now that I’m here to stay). It’s probably THE best known place in Tokyo for young fashion lovers around the world. Harajuku was and still is a streetstyle spot where you can find a lot of infividual styles and interesting colorful outfits.

But it can also be a place of peace and quiet. We decided to first make a visit at the Meiji shrine at the other side of the station because it closes around 5 pm and it was already quite late. It amazes me everytime anew that it takes only a few steps along the broad walking way towards the shrine for the noise to disappear. Tokyo really is a noisy place, music is playing everywhere, advertisement and service notices, you barely can avoid it. Surrounded by large trees the (quite long) way to the shrine is shaded and in the hot japanese summers it’s super pleasant to be there.

The Meiji Shrine is a relatively new one, only founded in 1920 in honor of the Meiji Tenno and his wife. The main building was destroyed during the second world war but was rebuild and completed in 1958. On the way to the shrine you will see a wall of sake barrels that are donated to the shrine, as well as wine barrels on the opposite side. The shrine itself is a tourist spot and on the Ema (small wooden plaques on which you write your wishes and prayers) you can find languages from around the world.

Of course you can also get Omikuji (fortune telling paper strips) and Omamori (amulets) for a lot of different occasions. I remember the time we went there the first time during our semester abroad, I bought the prettiest one (small white, hear shaped with a little bell) which happened to be a love charm (^_^). I’m not sure if it was the Omamori but as I met my husband a few weeks later I can’t complain about it not working.

After the Meiji Shrine we headed back to the street, already being under the last people to leave while the gates were closing. We headed straight for Takeshita-dôri to take some pictures, and get something to eat. Takeshita-dôri, the small street lined with shops catering to every fashion fad and the biggest Daiso in Tokyo, is never empty, or at least I haven’t seen it. And somehow there is one thing you really HAVE to do when you are there: Eat a Crêpe.

A few years back there was really just one store that sold the absolutely delicious treats, this time I counted six and before each one was a long line. Normally I get my Crêpe from “Marion” but we decided to try a new one and stood in line for about 25 minutes before finally getting our Strawberry Melba Surprise and Matcha Cheesecake Deluxe Crêpes. 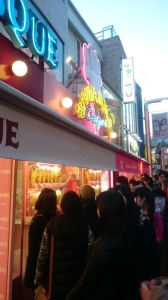 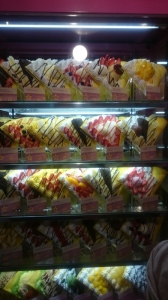 Afterwards we took some Purikura (photo stickers) but I have to say, it’s getting harder and harder to take Purikura together with a man. Back in the days we took quite a lot of purikura and it was always a lot of fun, but all the new machines seem to be for women only. Why? Because they alter your face so much that it’s scary. I had no make-up on and was quite red from the sun but on the stickers I look perfect. White, smooth skin, no flaws whatsoever, big blue eyes, all in all kind of glowy. So far so good, but the you look at my husband and somehow the big eyes, the lipstick and rouge don’t seem to suit him so well f(^_^;) …and that’s the reason I’m not allowed to show the purikura we took in Osaka last year, because then we accidentially chose even a “Special Make-up” booth…

Nevertheless we had a great day 🙂