Day 2 of our Hokkaido trip was spent not far away from Sapporo in Otaru, the town with the famous canal.

The next day, after a surprisingly good breakfast, we drove to Otaru, where another snow festival was supposed to take place. But – who would have thought it – it ended the night before…

Before settling into the hotel for the day we wanted to drive to the Yotei-san, a mountain with a supposedly spectacular view. Supposedly, because on our way there we were caught in a snow storm and decided to turn back. I hadn’t seen such a fierce snow storm before and it was difficult to even see the streets. A few minutes after we turned back we heard over the radio, that every street around the Yotei-san was close because of a blizzard. But I did not regret driving out there, because the view of the rough sea on one side and snow-covered cliffs and mountains on the other was breathtakingly beautiful.

Before the snow storm

In Otaru we made a short stop at the hotel and then went to the famous canal. In the past Otaru was an important harbor and trading town and many old warehouses and buildings along the canal are well-preserved. 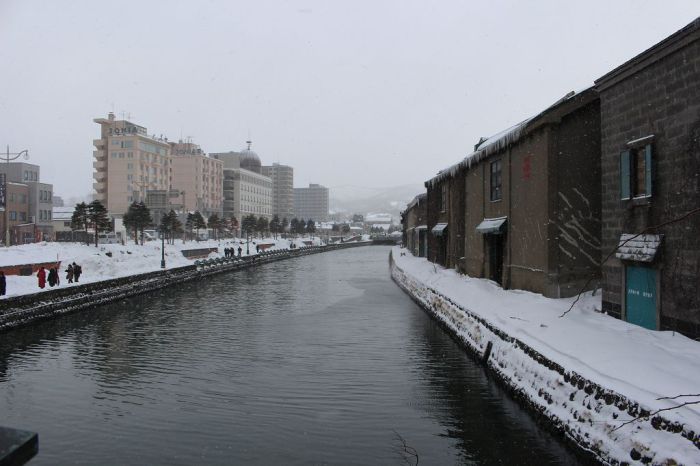 Bridge Decorations at the Otaru Canal

A speck of color in the snow

Despite the cold the surroundings of the Canal was filled with people, but we weren’t able to withstand the cold wind very long. The thermometer showed -6.7°C but the felt temperature was around -10°C at least.

My husband and his parents had been to Hokkaido a few years before and we basically took the same route plus a few extra sites. The region is also known for fresh crabs and seafood in general and in Otaru there is a small market street, where you can choose from the fresh seafood, fish and crabs that are offered and have them prepared there right away.
We choose two crabs and had some broiled fish and squid. The taste was great, but fish and crabs are really not that easy to eat. 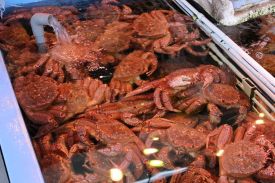 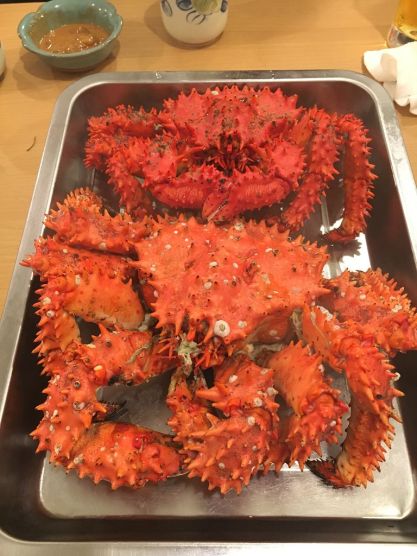 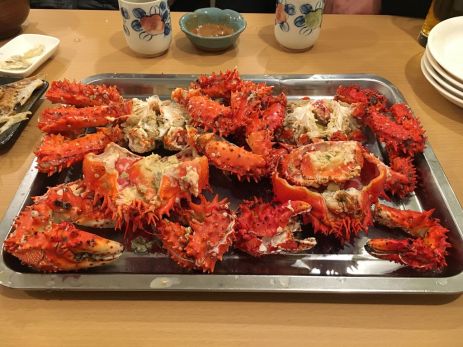 After running around in the cold all day it was so nice, that the hotel we stayed in had an Onsen, which were very nice and so relaxing. To make sure, that no man “accidentally” finds his way into the women’s Onsen it has a security code, which is handed to the female travelers at the reception desk. There seem to be no concerns that a woman might sneak into the mens Onsen…
Another very nice service from the hotel are the “midnight noodles” – a hot noodle soup, which you can get free in the restaurant of the hotel (conveniently located directly opposite to the Onsen) between half past nine and half past eleven. 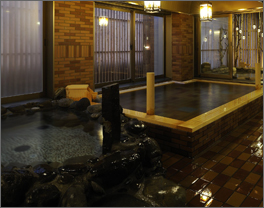