I’m finally sitting in a plane to Japan and I feel both sad and elated at the same time. I just had to say my last goodbyes and that really wasn’t easy.

But let’s rewind a moment and take a look at the last weeks.

Before I could get really started with the apartment I was working fulltime till March 6th and the last weeks at work were more than stressful (especially emotionally). On Thursday I said goodbye to my direct boss and for Friday I had ordered two large Sushi plates at Maruyasu. One of my colleagues helped me get it and set up the table in the big conference room where everyone gathered. I had also brought Mochi and Sake, even though I didn’t think anyone would drink it right away because it was only noon. Nevertheless in the end I toasted with several people and the plates were gone in a blink. 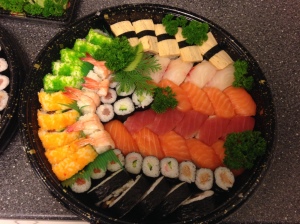 One of the other bosses, who I have also been working with closely, held a short speech and gave me a beautiful flower bouquet with a card and a go-away present. Very fittingly it was a passport holder from MCM in pink and orange and I think it suits me very well. Not long after the get-together I made my last round through the office and wrote some emails to people who couldn’t be there to say goodbye. 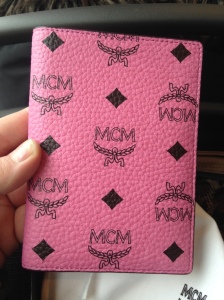 I went straight home and there were my elder sister and my mother waiting for me to help me sort through some more of my stuff and then later take me back to my parents home where I planned to stay the last two weeks in Germany.

Though we did get a lot done I really was at the end of my strength and just wanted to leave. I think the weeks before really took a toll on me and I was equally relieved to get out of there and somewhat afraid of the work I knew still lay ahead of me.

The following Saturday was very relaxing and I could spend some time with my family, but the Sunday was quite exhausting. I woke up and I just knew it was a bad day with me feeling whiny and sad and desperate for no apparent reason. I was sure of it then and it is still true now: I really need some free time to relax and recharge.

On Monday I spend the whole day in Düsseldorf because that very evening I had to put every shelf, all of the kitchen, living room and so on, on the curb so that the garbage disposal company could pick it up the next morning. By the time my little sister arrived in the afternoon I was already exhausted and when my brother and two brother in-laws came I was at the verge of tears and only wanted to sleep. I would have never been able to make it without them and I am so thankful for all my family has done for me in this stressful time. I would have picked another date for it, but the disposal company only offers two dates per month, one was the Tuesday, the other would have been today, so that really was out of the question.

On Tuesday morning I spend my time with my nephew while my sister and brother in law were packing for the holiday they are still on right now. So that was, after my best friends, my second goodbye. When they were ready to go I was kind of glad that it was such a hurry (because once the children are in the car you really should get going ^^) because it felt more like I only say goodbye to them for the time of the holiday. But when I hugged my little nephew a last time and he said “I love you so much” I nearly burst into tears.

The remainder of the week was spend mainly in my apartment in Düsseldorf to get everything sorted and packed and on the weekend my father and brother helped me move some furniture we wanted to keep and slowly but surely my apartment really looked like we were moving out.

Unfortunately the whole week my parents were really ill and I knew it was only a matter of time till I caught it, too. Though I really tried, from Tuesday the following week I was so ill that I could barely manage. Of course it didn’t matter because I just had to get all my stuff out of the apartment and I was so thankful that on Saturday my family helped me load the last of the boxes into the cars and clean the apartment. Otherwise I would have never made it till Sunday afternoon when I returned the keys to my landlord.

Sunday I also had to say goodbye to my father, which was really hard. He works in Vienna and comes home only on the weekends. On Monday I then said goodbye to my aunt and uncle and I barely managed to prepare anything at all. This left still a lot to do for today, but thankfully I had pre-packed my suitcases while still in Düsseldorf.

Oh my gosh, packing my suitcases… There was so much left to do, especially looking through the papers, making last arrangements, etc. and there was quite something that didn’t make the cut because I was already over the allowed baggage weight. The worst thing though was the view of all my stuff and boxes on the terrace because it meant that I’d have to leave it to my parents to put them away. I know I did more than I should have with my cold, but it really bothers me a lot, I should have done it myself and not create more work for them (even though they both said it’s okay).

Around noon my grandmother came over and we played some cards together before saying goodbye. Seeing your grandmother in distress really isn’t easy and even though I know that she wants me to be happy she just was really sad to see me go. Then finally at 6 pm my mother and I made our way to the airport where my little sister, her husband and my brother were waiting for us. The baggage drop-off was really fast and I even got upgraded to premium economy because the plane was so packed. Which meant a lager seat, more room for my legs and Business class desserts *yummy*

At last it was time to say goodbye to my mother and the others and it was really really hard. It was different from the last time, when I only went for a year. It was sad then but I think it was equally hard for my mother to let me go as it was for me to say goodbye. Thankfully the goodbyes were relatively quick, otherwise I would have started wailing right there and then.

Security check wasn’t a problem, though I always seem to have too much stuff with me which makes it difficult to remove accessories, my belt, phone, laptop from the suitcase, and so on. I made a quick stop at the duty free for some water (curse the policies that don’t allow you to bring some of your own and force you to buy heavily overpriced little bottles) and some last minute o-miyage.

And now… now I’m sitting in my really very comfortable seat and wait for dinner before I will try to catch some sleep and think about how strange it feels to finally be on my way to Japan, on my way to a new life.

6 thoughts on “Time to say goodbye”