But first a little history about “Tokyo next to the Rhine”

Düsseldorf and Japan have a long history. On January 24th 1861 Prussia and Japan signed a Friendship and Trading contract in Edo (now Tokyo) which has been held up ever since. 2011 marked 150 years of German-Japanese Friendship and was celebrated accordingly. To emphasize this connection “Japanese weeks” and “Japan years” are held regularly (and “German years” respectively in Japan). The Japan Day is in this spirit held annually since 2002 and brings more and more people to Düsseldorf every year (2013 about 600.000 visitors).

“Die Maus” The official mascot for the german year in Japan

“Tokyo next to the Rhine” has today about 300 japanese companies and nearly 6500 japanese People are living and working here. Next to institution like the Japanese Club, The Japanese IHK (chamber of industry and commerce), JETRO and many more, a japanese kindergarten and school make sure that japanese Expats can bring their families with them, while the many japanese restaurants and supermarkets help to feel a little bit more at home.

Though the sheer mass of people sometimes makes it really hard to move forward, it really is worth it fighting through to see what the Japan Day has to offer.

On several stages alongside the rhine one can see a large variety of performances. My highlights on the main stage were the “Tentekko Taiko” a drum group, the japanese kindergartens (the little kids are just so adorable) and the Koto group (traditional japanese instrument).

The second stage is reserved for popular japanese culture and is showplace of Cosplay Fashion and Karaoke Competitions and changing singers and bands. With the ever growing popularity of anime, manga and japanese pop culture not only is this stage always crowded, the people in the crowd get more colorful every year. 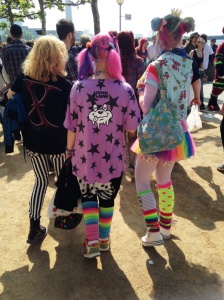 I noticed those two only after they had already walked by while I was talking to someone at one of the booths and only got a quick shot. I love their colorful Harajuku-style outfits!

Next to cultural performances a large part every year are the various sport presentations including Sumô, Jûdô, Kyûdô, Karate and Kendô. You could also visit the Samurai camp or watch the japanese international school play soccer against other Düsseldorf elementary schools.

The information and sales booths

It’s not easy to get through the masses to informationa and sales booths but the large offer of different exhibitors is definitely worth a look.

There are informations stands for JAL and ANA, the japanese Airlines or from the Japanese Club, that offers a variety of “Join in” activities ranging from Kimono fittings and Ikebana to Origami and Calligraphy. 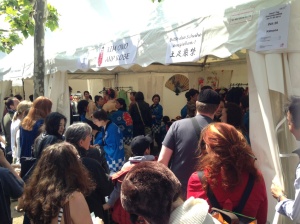 On other stands you can play a game of Go or even learn some Japanese with the LSI Japonicum. 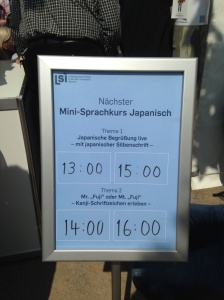 In the last years more and more sales booths took part in the Japan Day and they are nearly as popular as the concession stands 😉 Especially the “pop culture zone” is always packed with people buying their anime and manga merchandise and this year I also saw Lolita and Visual Kei clothing stands. 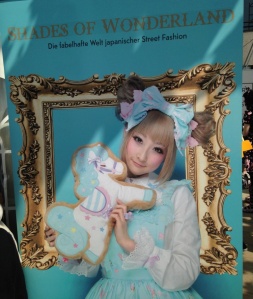 The food you can buy at the Japan Day is quite similar to the stands you would find at a summer festival (natsu matsuri) in Japan. Tori-Karaage (fried chicken), Yakitori (Chicken Skewers), Yakisoba (fried noodles) and of course also lots of beer. 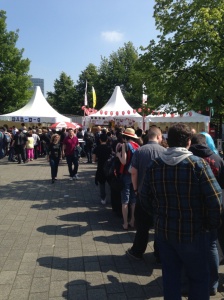 Standing in line for Yakitori

The japanese fireworks (hanabi) are every year the highlight of the event and everyone tries to get the best seat to watch the lights explode over the river.

This years motto was “Japans four seasons” and was divided into five parts.

The last part is undeniably my favorite one. While standing on the bridge in the dark and watch the sky light up above me makes me feel small and yet it makes me also feel so romantic and excited and astonished and all kinds of delighted. I definitely am a fan of fireworks and I so regret not having been able to go to a summer festival (natsu matsuri) while I was in Japan. Well, it’s not too late, maybe next year (^_^) Hopefully with a better camera than my phone… 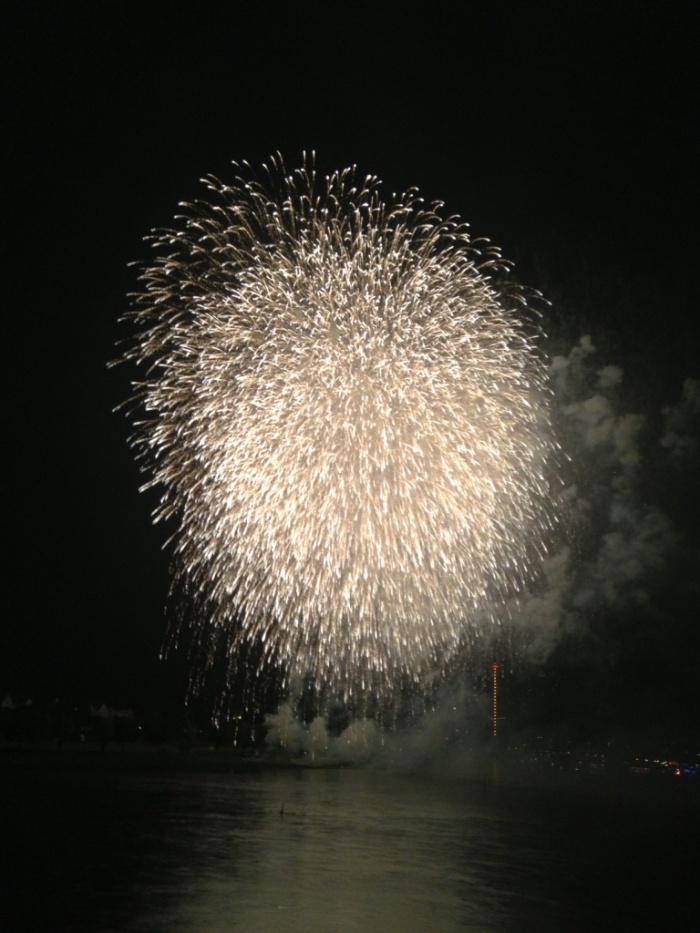 I hope everyone had as great a day I had with my husband, see you all next year! (^_^)/