Greg Urbano, “hobbyist photographer, persistent blogger and part-time adventurer, living in the “sunshine city” of Saint Petersburg Florida” wrote a post a while ago titled “Where in the world is my Postcard?“. With this post he gave his reades a quite unique chance to interact, by sending out postcards to them, which in turn they then could take a phote of with the backdrop of their hometown.This definitely sounded like fun and after I submitted my adress I actually got his postcard in the mail this week (^_^)

The postcard is a print of his “Ode to HDR” and has the short poem written on the back.

Oh where would I be

in this photographic sea.

Without the colors and details

in which HDR prevails.

it does sound strange.

If it were not for thee

I would not be me. – Greg Urbano

I though about where to take a picture and yesterday I finally had the chance to finish work early and take some pictures (tough only with my phone so they could be better).

The “Rheinturm” (Rhine Tower) is about 240 metres high and has in 172 metres a restaurant that moves around the axis and gives you a great view over the town. If you are not hungry there is also a viewing platform which can be visited. But most people know the tower for it’s other function. Besides being a landmark, it’s also a clock! Indicated by lights one can see what time it is. 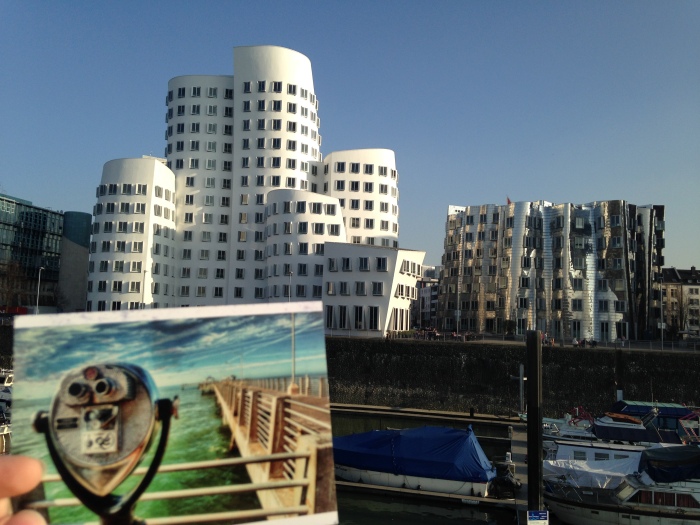 Here’s another view of the two of the buildings designed by Frank Gehry. Though controversal in the beginning and often getting bad critique in the newspapers, they are now three of the most photographed buildings in Düsseldorf. From which angle ever you look at them, you won’t find any symmetries and the outside pointing windows are very peculiar. All three buildings are office spaces, but on the first floor are a restaurant and a bar, which are very popular, especially in the evening. 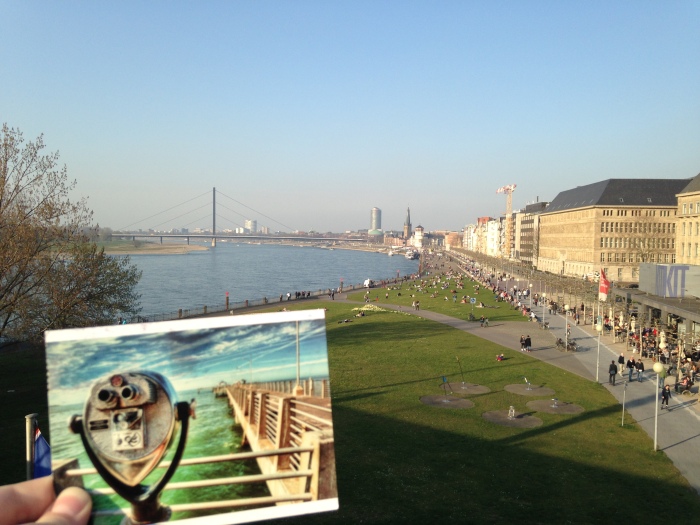 The last two views are from one of the bridges into the city onto the old town of Düsseldorf. With the weather being as good as this the last days the promenade is packed with people, as are the bars and restaurants alongside the river.

6 thoughts on “Your Postcard visiting Düsseldorf”