If you have ever been to Japan there is a big chance that you already know the popular store Donki (short for Don Quijote) or have at least seen one of them.

At Donki (ドン・キホーテ) you can get everything! From stationary over household goods and foods (specially snacks) to Make-Up and Luxury Accessoires, you’ll find anything you want (or didn’t even know you wanted). Another contributing factor to its popularity are the comparably low prices. The chain has stores all over the country and even three in Hawaii (though with the amount of japanese visitors in Hawaii maybe its considered Japan).

The variety of goods also make it to the perfect destination for souveniers for friends and family (according to Donki half ob all Tourist come to and shop at Don Quijote). That’s also the starting point for the Comic Essay. But what is a Comic Essay actually? Basically its a Manga that consists mostly of only one volume and deal with a specific, often factual topic which is loosened up by the illustrations with a humorous touch. 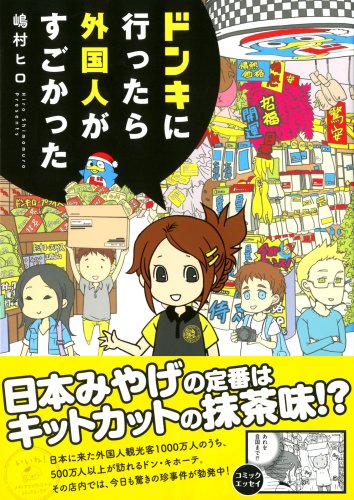 The title ドンキに行ったら外国人がすごかった (Donki ni Ittara Gaikokujin ga Sugokatta) can be loosely translated as “When you go to Donki the amount of Foreigners is amazing”. The Comic Essay is written and illustrated by Shimamura Hiro with the main character being a sales girl at Donki who is constantly surprised by the sheer amount of foreigners and their behavior.

I stumbled over the Comic while browsing the Donki Onlineshop and was immediately captured by the slogan on the banderole: 日本土産の定番はキットカットの抹茶味！？ (Nihon Miyage no Teiban ha Kittokatto no Maccha Aji!?) which means “The most popular souvenier from Japan is matcha flavoured KitKat?!” This I could answer with a wholeheartedly “YES!” because up until now every time I visited Japan you could find at least one Matcha KitKat Pack in my suitscase on the way bag (but let’s be honest, I never was only one…)

For about 8 Euro (1.080 Yen) you can’t go wrong, so I let my husband buy it for me right after it was published on December 19th 2014. The 128 mostly black and white pages (with some colored ones in between) it wasn’t too thin and it definitely surpassed my expectations. It is always interesting to read about the behavior of foreigners from a japanese point of view and I definitely found myself in some of the pictured situations.

For now the Comic is only available in japanese, but like many other comic essays you can find this one in the Teenager Corner in the bookstores which ususally means that the language is kept relatively easy. This makes it ideal for learners of the japanese language (about level N3) even though not every kanji has furigana. If you are somewhat experienced in the use of dictionaries it shouldn’t be a problem to find the Kanji. 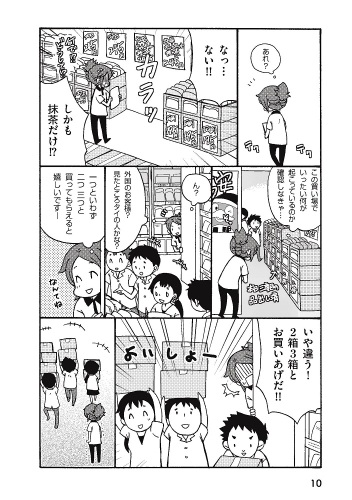 Here’s an example page from the Comic Essay (with a somewhat loose translation):

2) G…Gone!! Moreover only the ones with matcha flavour?!

4) Oh? Foreign Customers? According to their appearance probbaly from Thailand?

5) I would be glad if they bought one, or even two or three bags.

6) Gah, wrong! They are buying two to three whole boxes!!

The comic essay is available at the Donki Onlineshop or at Amazon Japan and I can only recommend it.