Osaka, the third largest town in Japan has a particular image, evident in the saying

Which can be roughly translated as “Kyoto ruins itself with kimonos, Osaka with good food”. Food and eating is very important in Japan generally, but in Osaka it is the most important.

So what lies nearer than a photo post of things I have eaten in Osaka (^_^)
In Germany people often look at me with a raised eyebrow when I take pictures of my lunch or dinner in a restaurant. The thing is, since my time in Japan it just really became a habit I follow without thinking (that was before Instagram by the way). Especially when I am without my husband somewhere, or when he is out with friends we send each other our “look what I ate” pictures.
…maybe really a bit strange f(^_^;)

Well, here they are, my “look what I ate” pictures to share with all of you 🙂

Lunch/Dinner consisting of: salad, Ume Shiso Men, Yakiniku with rice, omelette and vegetables and fruit salad and chocolate for dessert. And it really wasn’t bad. The meal choice is definitely different when flying to Japan (you can even get onigiri in between the meals if you want to)

The breakfast was okay but after such a long time sitting in a confined space I think the fresh fruit were the best because they gave at least for a moment a fresh feeling.

After the evening I am sure it would be better to make several posts, because it’s just too much. So I’ll consider this part one and make a post for every day (^_^)

Maybe to make the transition easier our first lunch was at a western style restaurant where they served a lot if meat and sausages, but at least I got my first matcha latte 🙂 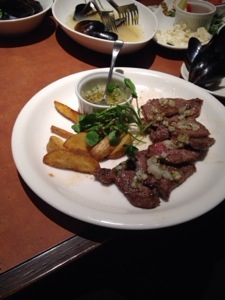 Dinner was the first high class meal we had (with a lot more to come) at a exclusive teppanyaki restaurant. For teppanyaki everything is prepared on a (very) hot plate in front of everyone.

The appetizer was followed by shrimps, which (unfortunately for them) were still alive when put on the hot plate. What I have never seen before, is the way the cook cut of the head and legs and made them separately. I would usually not eat the head and legs but of course I tried them. The legs were so crisp that they reminded me of chips, but the fact that it looks like a giant spider really put me off.

The next dish was met with “ooh” and “aah” when the cook brought in a big Kobe beef part. Accompanied by fried garlic (very good) and assorted vegetables the meat was cut in small cubes and then flambeéd. Even though I usually don’t like meat with a lot of fat, this one was really good. 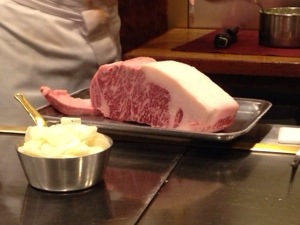 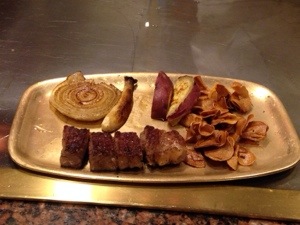 The last part was garlic rice (at which point all of us were already very full, a feeling that accompanies us every day) but it was too good to leave it.

3 thoughts on “Osaka – where eating is everything Part 1”

Damn it’s cold lately, especially in the morning when the whole world seems to be covered in a thin layer of ice. #winter #cold #ice #moss #nofilter #canitbespringalready